To say the last two days were jammed packed would be an understatement. We spent the last two days touring Manhattan, and trying to figure out why anyone would want to drive a car here. On the fourth day we went to Ellis Island, where a picture from 1903 Wild Rose is still proudly displayed. 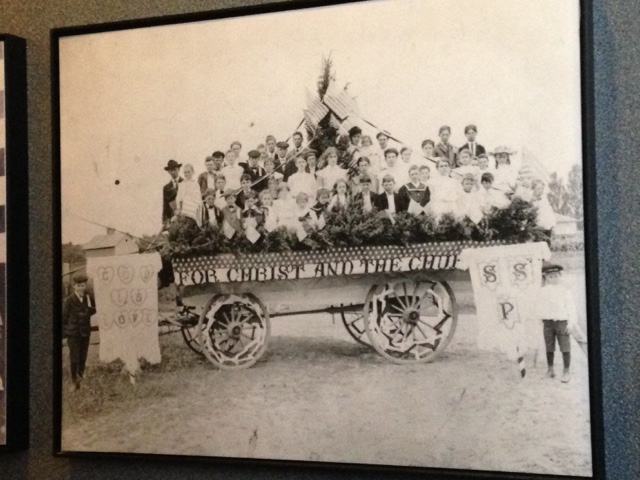 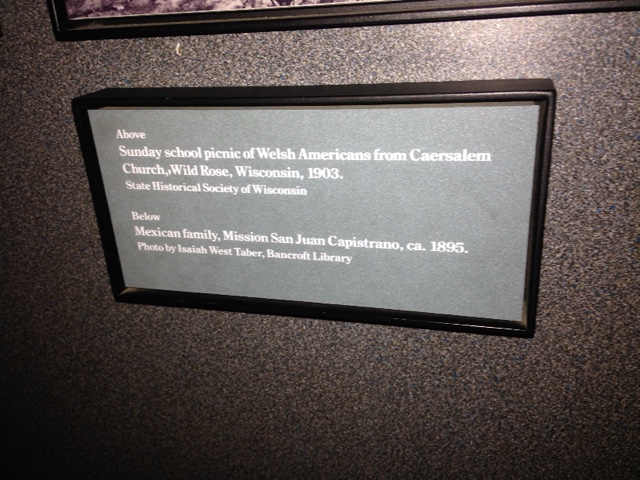 We the took the next ferry to see the Statue of Liberty, also arguably one of the most important symbols of freedom in the world. 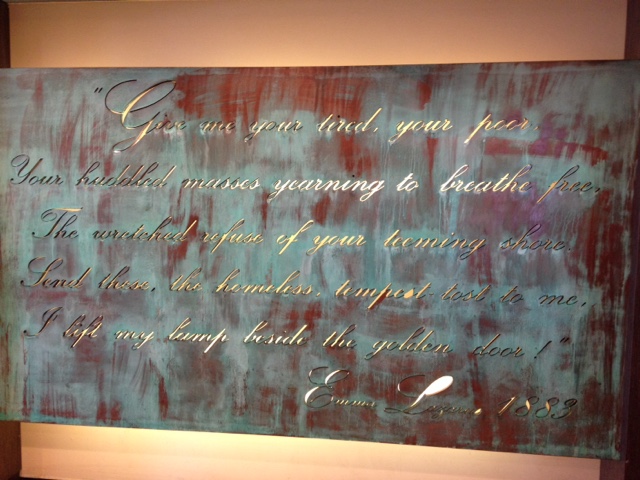 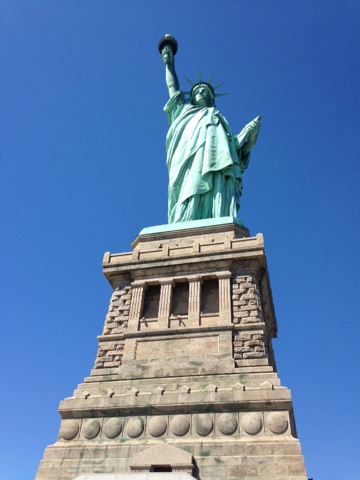 One of the comments overheard from several students was "I thought the Statue of Liberty was bigger."
After the statue, we took one last ferry ride to Battery Park in Lower Manhattan where we met up with the busses and headed up to Central Park West. The group then had about 90 minutes to explore the park,  many headed to Strawberry Fields, others to The Lake, some made it up to "Belvedere Tower/Castle" up by 81st street. After meeting up at Central Park South and 59th street we headed to Rockefeller Plaza where we took a few pictures and headed for the Top of the Rock to watch the lights come on over the city. 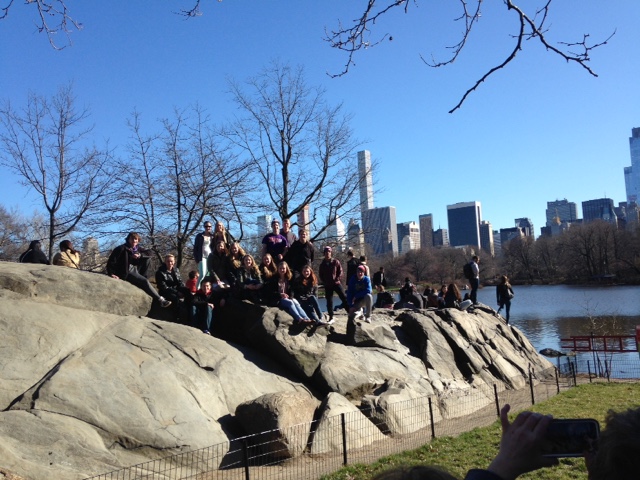 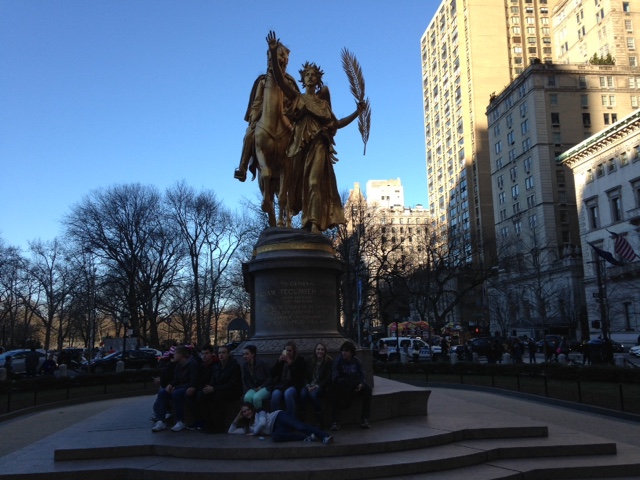 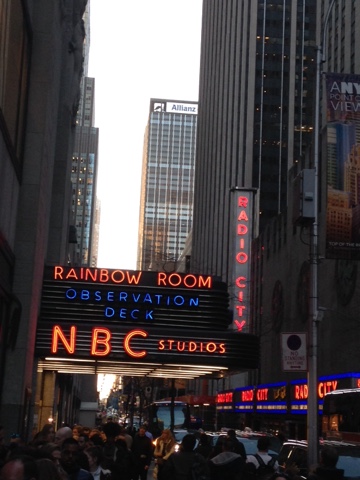 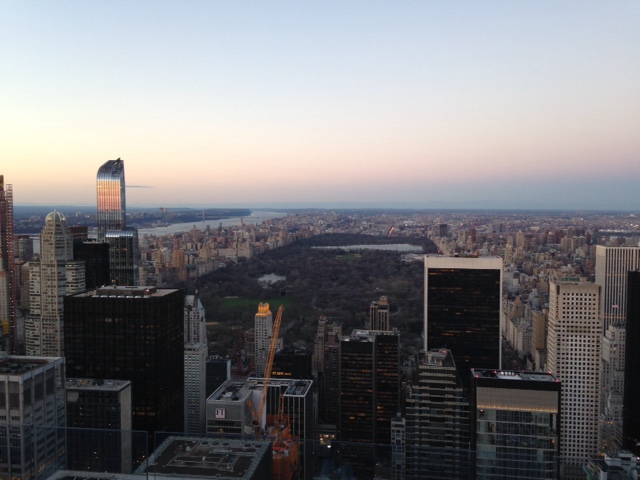 (Top of the Rock Looking North at Central Park and beyond) 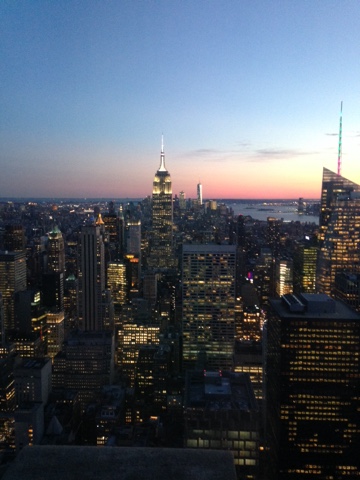 (Top of the Rock looking south towards Lower Manhattan, the financial district and points beyond.)
We capped off the evening with dinner st Ellen's Stardust Diner and headed back to the hotel. Day four was an exhausting, but rewarding day. There was a lot of walking, but the group persevered. Day 5 begins early, but I will tell you more about that in my next post....stay tuned
Posted by Unknown at 5:10 AM 1 comment:

Day 3 - The (Rainy) Streets of Philadelphia

If you read the day 2 post, I said that the forecast called for a chance of rain and thunderstorms and a high of 65. It never reached 65, but it did rain...a lot. We boarded the bus to downtown Philadelphia as a cluster of Thunderstorms rolled through, and when we reached Elizabeth, NJ at 7:30pm it was raining and about 38 degrees. The weather did not stop us from having a great time though and the students and chaperones persevered.
Our tour guides met us at the Constitution Center and took us around historic Philadelphia. Highlights of the walking tour include: Independence Hall, originally called the Pennsylvania State house, where the Declaration of Independence and Constitution were signed. The Liberty Bell, arguably the most recognized symbol of freedom in the US, and across the world. Elfreths Alley, the oldest continuously used residential street in the US where houses date back to 1702. The Betsy Ross house, where the American flag was created in secrecy. Christ Church, where many of the founding fathers worshiped, Ben Frankin's grave, and the US Mint, where coins are made.
After putting on a few miles we ended our time in Philadelphia at the Constitution Center, where we say a powerful presentation on the meaning of the phrase "We The People" and explored the meaning behind our Constitution. There is also founders hall, which features life size statues of the founding fathers and how they may have been posited when the Constitution was being signed.
SIDE NOTE: Robert Morris is one of the only founding fathers to sign the Declaration of Independence, Articles of Confederation, and the Constitution. He also shares his name with my Grandfather. I may have tried to convince the kids that the Robert Morris in founders hall was my my Grandfather.
We headed up the famous Jersey Turnpike to Elizabeth, NJ and our home base for the next 3 days. Wednesday we tour Ellis Island, the Statue of Liberty, Central Park, Top of the Rock and more. We have a busy couple of days ahead. Enjoy the pictures below and remember It is a GREAT day to be a Wildcat!
-- Mr. Yeska 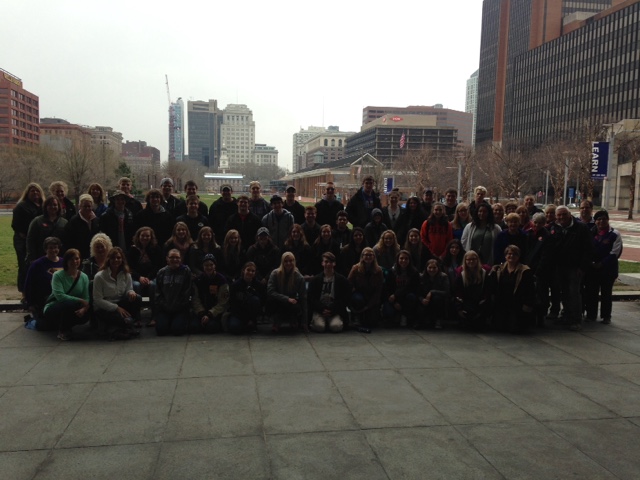 Group photo with Independence Hall in the background. 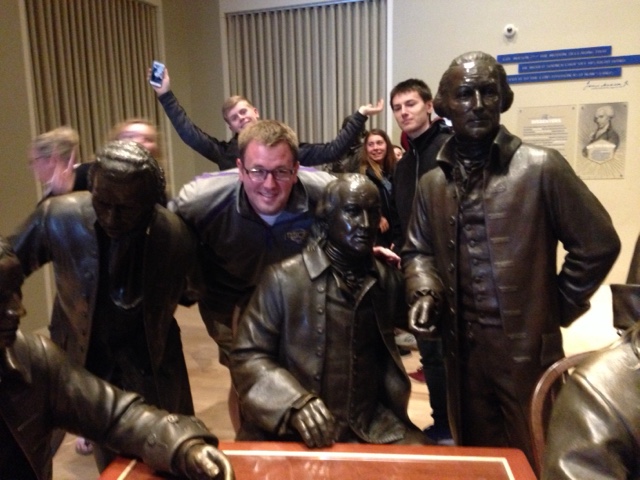 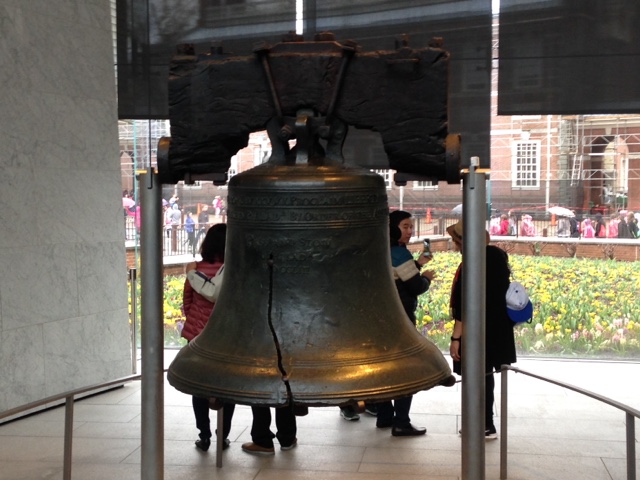 A true symbol of Freedom 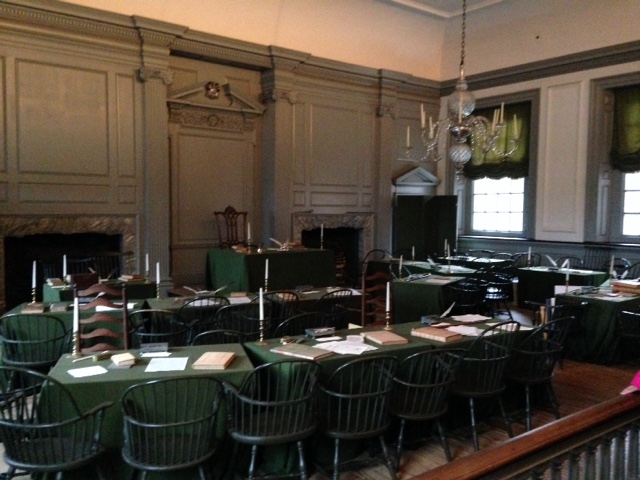 Inside Independence Hall. This is where the Declaration was signed. 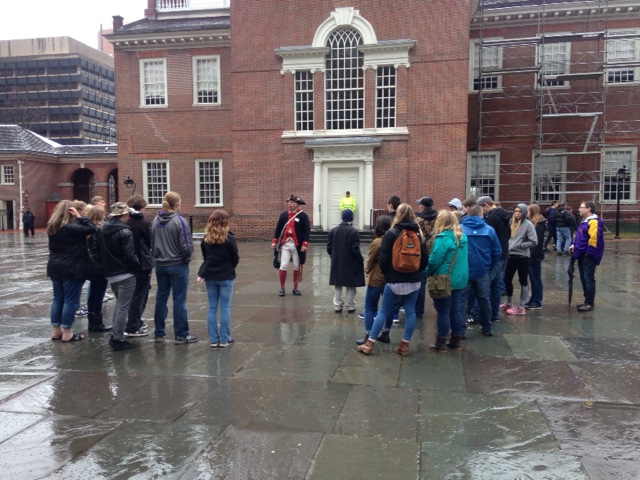 Out Philadelphia tour guide, outside of Independence Hall.
More pictures to follow.
Posted by Unknown at 5:12 AM No comments:

Our second day featured a long bus ride through the Allegheny mountains, and rolling hills of the Keystone state. We arrived at Vallley Forge National Park just after 3pm EDT. Our tour guides took us around the park and provided a great history about the significance of the historic site. We also learned about the many lessons the continental Army learned to prevent the spread of disease in the late 1700's. Stops on the tour included replica soil dears quarters (roughly 14'x16' and slept12), General Washington's house where students got to touch and use the same hand railing to get upstairs that George Washington used, and the Episcopalian church built in Washington's honor.

A side note about the church, each Sunday is dedicated to a state in the union determined by the order in which the state joined the union. This Sunday 4/2 is Wisconsin's Sunday.

We made it to our hotel just before 6, where students had just over an hour to relax, workout, or nap before heading to Dave and Busters for dinner and a night at the arcade. Tuesday we are taking a walking tour of historic Philadelphia, and get to see important buildings in the creation of our nation.

Monday it was sunny and 60, Tuesday calls for a chance of rain and thunderstorms, but on the way to 65.

(Pictures to follow later)
Posted by Unknown at 5:23 AM No comments:

We left Wild Rose in the pouring rain at 6:30 Sunday morning. It rained heaviest in Wisconsin, and we drove in and out of showers and sun through Illinois, Indiana, and Ohio. When we left it was 32 degrees, by the time we stopped in Indiana it had made it up to 53. Everyone seemed excited about the warmer temperatures.

Sunday was a travel day with very little excitement, and a lot of time on the bus. The kids were able to burn some energy at the pool last night. We arrived at our hotel at 6:45 EDT, which gave the spring sport athletes time to stretch and run, or throw and catch.

Our agenda for tomorrow includes: A visit to Valley Forge, where George Washington and hte Continental Army spent the winter of 1777/78, and an evening at Dave & Busters. 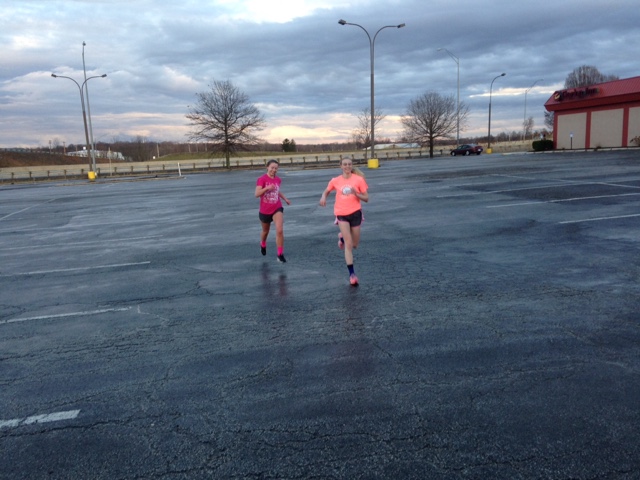 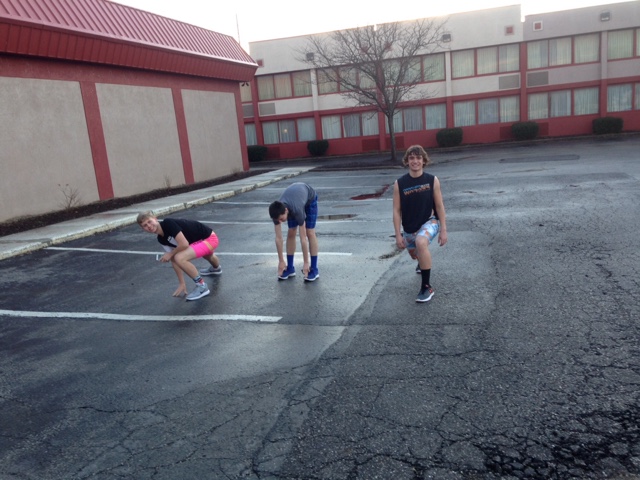 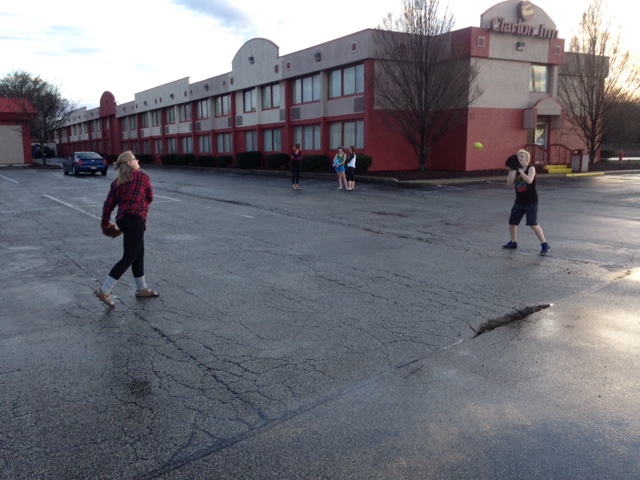 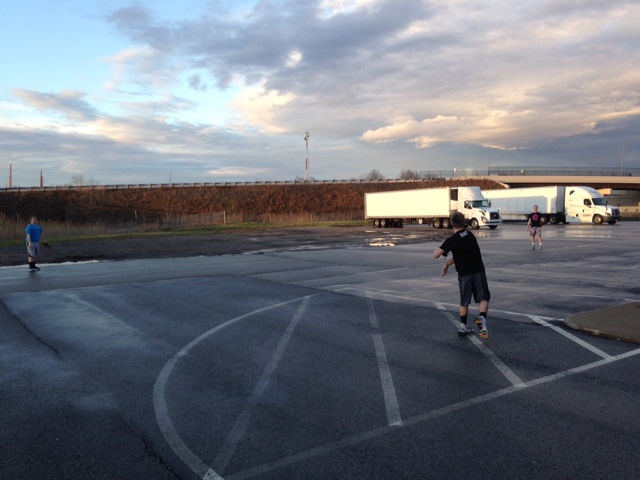 The students, chaperones, and teachers are excited and ready to go. Wheels will be rolling at 6:30 Sunday morning. Our first day will not be terribly exciting, with scenic views of the Indiana and Ohio Turnpikes. However it is not all about the destination, it is about the Journey!

Follow along with our journey, on this blog, I will also try and get pictures to the districts social media sites. If you have any questions, or comments about the trip and what we are seeing. Leave them in the comment section below.

HAVE A GREAT WEEK!

It is hard to believe, but as of today we are three weeks away from departing on the 2nd edition of the Social Studies Trip to Philadelphia and New York City. The students, chaperones, and myself are excited for this adventure. A letter will be going in the mail this week with expectations and final reminders.

Stay tuned for further updates as we get closer to the 3/26, and follow along with us on this journey. 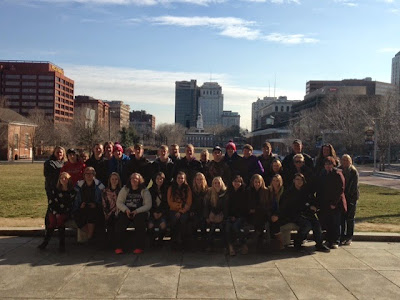 It is a GREAT day to be a WILDCAT!
-Mr. Yeska